Neil Armstrong was born in 1930 on the farm of his mother’s parents, southwest of Wapakoneta. After living in a number of Ohio communities, the Armstrongs returned to Wapakoneta in 1944, purchasing a home on W. Benton St.  At the time, Neil was in high school. His family included his parents, Stephen and Viola, his sister June, and brother Dean.  This is a private residence.  Please view it from the sidewalk only.

The Auglaize County Courthouse was constructed in 1894.  The courthouse retains much of its original architectural detail including stained-glass skylights, decorative tilework, and even light fixtures, furniture, and telephone booth. To commemorate the building’s centennial, the Auglaize County Historical Society restored the Statue of Justice, which formerly stood on top of the tower, but now graces the building’s lobby. You are more than welcome to visit the courthouse during business houses—8:00 a.m. to 4:30 p.m., Monday through Friday--but please remember that this is working building. Court may be in session!

Black Hoof was a chief of the Shawnee.  His Indian name was Catahecassa. Black Hoof fought at the Battle of Fallen Timbers and represented the Shawnee at the signing of the Treaty of Greenville in 1794.

Black Hoof became convinced that the Indians had no hope against the whites except accommodation.  He supported peace with the Americans and encouraged all Shawnee to do the same, but conflicts continued.  Black Hoof proved to be a major problem for Tecumseh and the Prophet as they tried to unite the Indians against the white settlers during the early 1800s.

Black Hoof died in 1831, just a year before the Shawnee were removed to Kansas.  Quaker missionary Henry Harvey memorialized him simply but completely when he stated that Black Hoof “was always an advocate for his own nation.”  The monument honoring Chief Black Hoof was erected at the St. Johns Cemetery in 1976.

Neil Armstrong attended Blume High School, graduating from here in 1947. He played baritone in the school band. With three friends, he formed a jazz combo that performed at school assemblies. Neil often stayed after school to work in the science lab with his teacher, John Grover Krites. At age 16, he earned his student’s pilot license at Port Koneta Air Field.

This Ohio Historical Society marker commemorates the Dayton and Michigan Railroad – the single most important impetus to the growth and development of Wapakoneta.  The Dayton and Michigan began operations in 1858 providing the people of Wapakoneta with their first connection with the outside world.  It was the first railroad in Auglaize County and the first north-south line in western Ohio.  With a route stretching from Lake Erie to the Ohio River, the railroad allowed local farmers and industrialists to ship their products and goods throughout the nation.

This Ohio Historical Society marker commemorates Dudley Nichols, the man who first refused the Oscar.  A Wapakoneta native, Dudley Nichols (grandson of John Nichols) was a newspaper reporter turned screenwriter. In 1936 he received the Academy Award for The Informer. However, as a founder of the Screen Writers’ Guild, Nichols felt that Hollywood treated his profession unfairly and refused the honor.  In fact, he spurned this Oscar three times before growing weary of returning it in the mail.

Fort Amanda was one of a series of forts extending north from Piqua to Fort Meigs (present day Perrysburg), built by order of General William Henry Harrison to supply the United States army during the war of 1812. The fort’s construction began in the fall of 1812 under the direction of Lt. Col. Robert Poague, who named it Amanda in honor of his daughter. The original structure is no longer standing, but a granite monument was built in 1915 at its site. Fort Amanda is also home to a rich variety of plants and animals.  Trails lead through wooded ravines, down to the river, and out to the monument, making the park a perfect place for a walk or a picnic.

Established in 1886, Greenlawn Cemetery is the final resting place for some of Wapakoneta’s most prominent citizens, including many referenced in this brochure.  The most elaborate grave may belong to Charles Herbst. We don’t want to give away all the details, but a temporary rail spur was constructed to the cemetery to deliver the 160 tons of granite for his monument.

West Auglaize Street is home to some of Wapakoneta's most architecturally significant homes. They represent many popular American house styles of the 19th and early 20th centuries – Eastlake, Queen Anne, Gothic Revival, Stick Style, Beaux Arts, Spanish Colonial Revival, Cape Cod, and Sears & Roebuck (catalog house). Please enjoy these well-maintained buildings from the sidewalk, as they are all private residences.

Wapakoneta’s Post Office was constructed in 1937 by the federal government as part of its effort to provide work for citizens during the Great Depression.  An example of NeoClassical architecture, the building is also noted for its lobby, which retains a mural about Auglaize County’s history by Works Project Administration artist Joseph Limarzi.

During high school Neil Armstrong worked at the Rhine and Brading Drug Store, a longtime business in downtown Wapakoneta.  He swept the floors in the morning before school and returned after school to stock shelves and work as a clerk.  He used his earnings from the drug store (40 cents per hour) to pay for his flying lesson at local Port Koneta Air Field.

This Ohio Historical Society marker commemorates Harry and Adelaide Stoutenburg Shannon who moved themselves and their two children, Harry, Jr., and Hazel, to Wapakoneta in 1913.  But they were no ordinary family.  They were "The Four Original Shannons," a stage act that had performed on the same bill as "The Three Keatons" (Buster) and "The Four Cohans" (George M.). The Shannons then formed their own road company, which played throughout Ohio, and, indeed, much of the rest of the country. All the while they maintained a home at 308 West Auglaize Street. Many members of their troupe would also board here during the winter, with rehearsals for the upcoming show held in the barn out back.

The Armstrong Family attended St. Paul United Church of Christ, one of the oldest congregations in Wapakoneta, dating to 1850. At the time the Armstrongs began going here, it was an Evangelical and Reformed congregation.  Neil was a member of the Boy Scout troop sponsored by the church, achieving the rank of Eagle Scout.

The historic Wapa Theatre was constructed as the Brown Theatre in 1904. Its spectacular, neon marquee was added in 1939.  Other than new seats and air conditioning, little has changed in the theatre since the time when Neil Armstrong and his classmates attended the latest films in the 1940s.  The theatre continues to show first run films on a daily basis.

The 1885 Wapakoneta City Building continues to house the local fire department as it has for more than 120 years.  With its prominent round–arched windows and doorways, the building is a good example of the Romanesque Revival architecture so popular in the 19th century.  The small glass structure in front of the building displays the fire department’s first equipment.

The First Presbyterian Church was constructed in 1862, making it the oldest Protestant church in the county.  It is also a very important example of Greek Revival architecture; its recessed entrance flanked by two large columns is the only example of this “temple” style in nine counties of west-central Ohio. The building now houses the Wapakoneta Museum of the Auglaize County Historical Society. 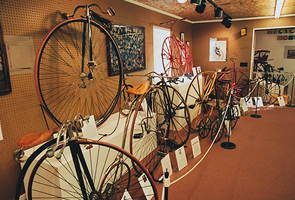 The museum is the largest private bicycle museum in the world dedicated to the history of cycling. Featuring more than 350 bicycles and countless pieces of cycling memorabilia, the collection includes bicycles from the former Schwinn Museum in Chicago.

Carillon Historical Park showcases Dayton’s rich heritage of creativity, invention, and milestones in transportation that changed the nation and the world. Founded by Colonel Edward and Edith Deeds, the Park is situated on a beautiful 65-acre campus next to the Great Miami River, just south of downtown Dayton. The Park shares the region’s history from its founding in 1796 through the important local contributions made during World War II. Visitors learn about these achievements while strolling through the Park’s 25 historical buildings and interacting with hundreds of artifacts and exhibits. Among them is the 1905 Wright Flyer III, the world's first practical airplane and National Historic Landmark, the 1835 B&O (Grasshopper) steam locomotive, and the first automobile self-starter. Visitors also experience Dayton’s pioneer history and its importance as a major transportation center illustrated by remnants of the Miami-Erie Canal. The Park is home to the Deeds Carillon, one of Dayton’s best-known landmarks, and the largest carillon in Ohio. Carillon Historical Park is a unique combination of museum, park and natural area.

Fort Recovery is the site of two of the most dramatic Indian battles in American history. On the grounds are two reconstructed blockhouses and connecting stockade. A 103’ monument honors the more than 900 soldiers who died in the battles.

Constructed as a feeder reservoir for the Miami and Erie Canal in 1845, Grand Lake St. Marys was the largest man-made lake in the world. The reservoir sites on the summit between the Ohio River and Lake Erie. Now Ohio’s largest inland lake with over 13,500 acres and 52 miles of shoreline, it is a prime recreational area offering a variety of activities for the whole family – picnicking, swimming, fishing, boating, skiing, tubing and camping. State parks are located at the east and west ends of the lake.

This scenic byway includes 60 structures representing the German Catholic settlements in Auglaize and Mercer Counties on the National Register of Historic Places. Consisting of churches, schools, rectories and convents, the grouping is symbolic of the strong German immigration to the region in the mid 19th century.

The Miami and Erie Canal was completed in 1845 between Cincinnati and Toledo. Many communities in western Ohio owe their development to the canal. Today, the canal towpath is a popular hiking trail and an Ohio Scenic Byway follows the canal along State Route 66. Visit Lock One and the Lock Keeper’s House in New Bremen; the Belle of St. Marys, a full-scale replica of a packet canal boat in St. Marys Memorial Park; and Lock 14 and Deep Cut Parks north of St. Marys.

They dreamed the dreams. They harnessed the technologies. They created a world where the sky was no longer the limit. The National Aviation Hall of Fame honors them for their service to country, their ingenuity, their courage, and their vision. The stories of the NAHF enshrinees are stories of America...of challenge and failure, of determination and, triumph. The NAHF Learning and Research Center has been designed to reflect their passion and innovation. Exhibits and interactives inspire young people to embrace the potential of technology, and to understand how the enshrinees harnessed and applied it in order to breathe life into man's dream of flight.

The National Museum of the United States Air Force is the world’s largest military aviation museum, boasting more than400 aeronautical vehicles-- many rare and one-of-a-kind -- along with thousands of historical items and powerful sensory exhibits that bring history to life and connect the Wright brothers' legacy with today's stealth and precision technology.

Ohio Caverns is the largest and most beautiful cave system in Ohio. The diversity of the crystal-white stalactite and stalagmite formations and unexcelled coloring are unique because they are still developing. In addition to the education and fun found in the caverns, visitors will also find a 35-acre park with shelter houses and picnic tables.

Ohio’s Historic West in the story of the American experience as illustrated in the region’s cultural and ethnic diversity, family farms, rural lifestyle, scenic beauty, ingenious inventors, hometown heroes, small town charms, and community spirit. Traveling the by-ways of the region, the experience is about rolling landscapes where towering church steeples dot the countryside and thriving small towns are filled with historic architecture and attractions that tell the unique stories of Ohio’s heritage. A complete travel itinerary for the heritage area is available at the organization’s website.